The Nittaku Acoustic is a highly regarded blade that is likely the company’s most popular model. Grouped alongside the Violin and Tenor, it is one of the three blades that make up the core musical instrument series.

Fast with great feeling, the Nittaku Acoustic is a top blade for skilled offensive players who like feedback from their strokes.

If that sounds like what you seek, stick around for our full review of the Nittaku Acoustic blade. 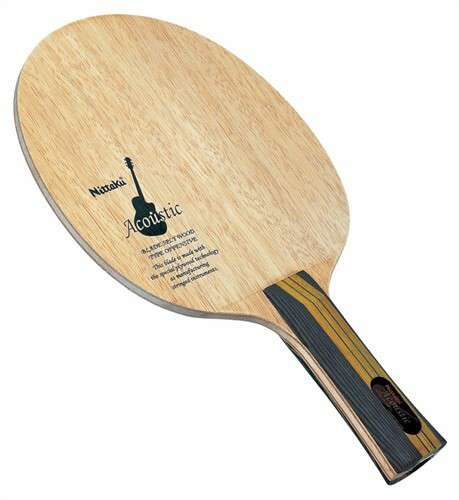 Read more: We’ve also reviewed the best table tennis blades on the market, so check it out if the Nittaku Acoustic doesn’t sound quite right for you.

The Nittaku Acoustic is a 5-ply all-wood blade. Its composition is limba-limba-tung-limba-limba. Yet what really sells this blade for most people is the innovative gluing technology.

Like the rest of the Nittaku blades from the musical instrument series, the Acoustic uses gluing techniques derived from string instruments. Leading to superior elasticity of the wood and thus better feeling.

It’s important to know that the Acoustic is available in a few varieties:

The standard version has a fairly thin handle that feels great to some but not others. This is why Nittaku released the large handle version. However, they went a step further by releasing the Acoustic SG Special. This is a bridge between the two for picky players.

You can purchase the Acoustic as either straight, flared, or penhold.

See the video below for an unboxing:

What Table Tennis Pros Use the Nittaku Acoustic?

The current highest-ranked player using the Nittaku Acoustic blade is Kane Townsend. He plays for Australia and is ranked 234th in the world. His forehand rubber is Fastarc G1, and his backhand rubber is Hammond Pro.

The next highest-ranked player is Mitsuho Kimura. She represents Japan and is ranked 303rd. She also uses Fastarc on forehand but instead uses Armstrong Attack 8 on her backhand, a medium pips rubber.

However, a much more high-profile player has used the Acoustic in the past, the greatest player of all time — the dragon himself Ma Long. However, that was much earlier in his career, and after switching between many blades, he has settled on the DHS Hurricane Long 5. Another incredible blade that we will no doubt review in the future. Ma uses Hurricane III National Blue Sponge on his forehand and Hurricane 3 Neo on his backhand to complete his setup. 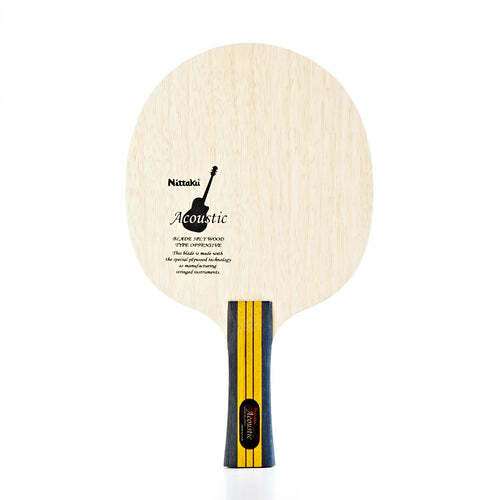 Many players view the Acoustic as the holy grail of all-wood blades, and for good reason, the Acoustic is the ultimate blade for offensive players who seek great feeling in their blade. How much of this is attributed to the unique gluing method of its layers is unclear, but the fact remains, players love how this blade feels.

You also do not relinquish much speed relative to carbon blades which is a huge plus. Generally speaking, all-wood blades tend to be noticeably slower and often a touch heavier than carbon blades. But the Acoustic is well-weighted at 85g, and is particularly fast for a 5-ply all-wood blade. Only top-level offensive players would critique its pace.

The area where its speed might hinder you somewhat is away from the table. The Acoustic shines at a close to mid-distance where it is fast and dependable. When you start taking several steps back, the lack of carbon rears its ugly head. As a fairly linear blade, you don’t get the same explosiveness away from the table as the Mizutani Jun Super ZLC would deliver for instance.

However, if speed away from the table is a priority, you can easily adjust your setup to target this style. Any fast rubber with an in-built catapult effect will turn your paddle into a rocket away from the table. This way, you get both the incredible feeling from the Nittaku Acoustic, and the explosiveness needed to play far from the table.

Such rubbers that will effectively fulfill this need are Evolution MX-P and Tenergy 64. Of course, just be aware that this will hinder your control quite a bit when you play closer to the table.

As is typical of all-wood blades, the control of the Acoustic is one of its greatest strengths. You feel this in all areas of play which helps you perform consistently. Looping is very simple, and thanks to the moderate dwell, you can produce a lot of spin with your loops. I am certain players who enjoy using slow spinny loop openers will feel right at home using the Acoustic.

The fairly linear pace of the blade also makes your shot placement predictable while you have the speed to execute deadly counters and loops — super qualities to have.

The main drawback to the Acoustic is its price. It is an expensive blade, and many players will simply not be happy forking out such a sum of money.

However, compared to other high-quality blades, I think it is a good value. Does it offer the best cost-to-quality ratio? No. Many blades under $100 offer far more value for money. The Yasaka Ma Lin Extra Offensive is one that comes to mind.

However, is this one of the best blades you can buy, let alone all-wood blades? YES. Absolutely. For this reason, it is a blade you should certainly consider if it fits your style and you want the best equipment. As I always say, high-end blades may seem overpriced, but if you take good care of them, they last for a very long time and practically pay for themselves. I’ve had my Timo Boll ALC for around 8 years now, and it’s still in excellent condition. Care pays off!

You also have to consider that its price is by no means atypical when looking at popular Butterfly blades. Most of their carbon blades are more expensive, some are even twice as much! Something to consider…

A playing area that the Acoustic doesn’t do that well is smashing. It has good pace, but it’s not very hard. If hard flat-hitting is a big part of your game, the Acoustic is not the best fit for you. Consider checking out the Butterfly Sardius instead.

As a final small yet noteworthy drawback. The Acoustic is a little vulnerable to splintering when you remove your rubbers. And as an expensive blade, you want to ensure it lasts. Make sure you get your blade varnished to prevent splintering. It’s a super easy fix.

Nittaku is one of the top table tennis brands that has been operating since 1920. Alongside being a market leader in ping pong balls, they also sell various other equipment such as rubbers and blades. Their top blade line is the musical instrument series, whereas their top rubber line is Fastarc. 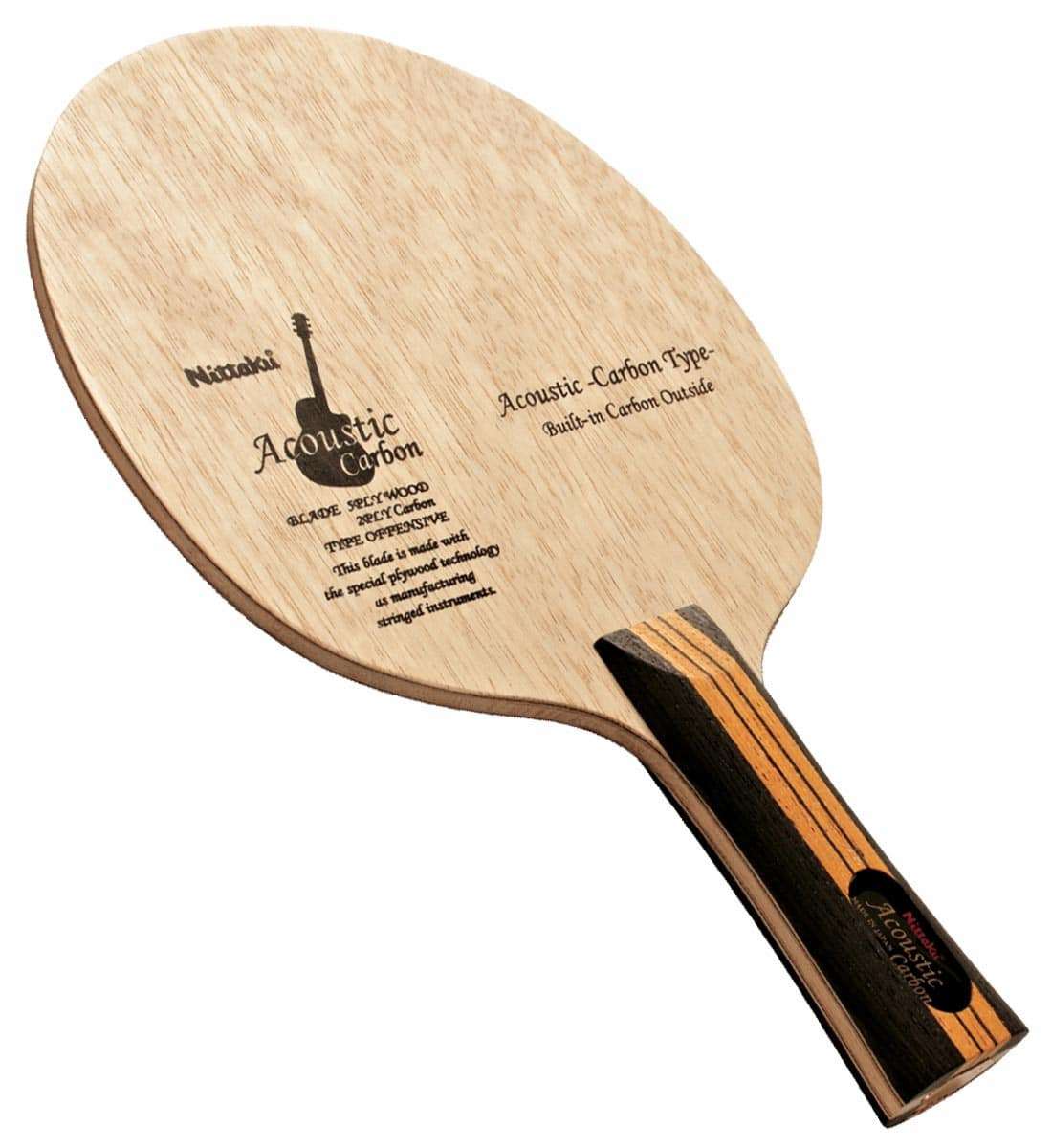 The Nittaku Acoustic Carbon is a great alternative to the Acoustic for players that want that little bit of extra pace that carbon brings to the table. Sporting the same composition as the Acoustic with the two additional layers of carbon, the blade is 7-ply. What’s great about this blade is the preserved feeling from the original Acoustic. It uses the same stringed instrument gluing technique, and it shows. You get great feeling with charged speed. A strong Acoustic alternative, to be sure. 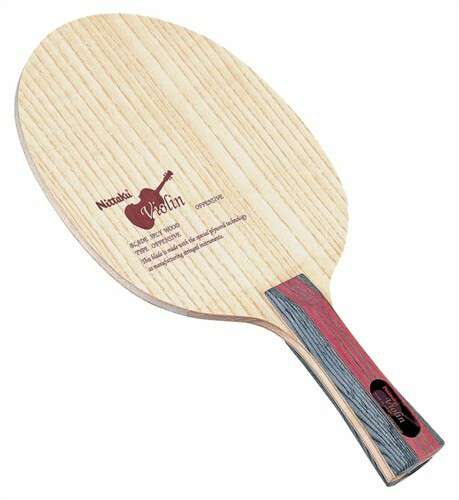 As another blade in the musical instrument series, the Violin plays remarkably like the Acoustic. However, it does differ in some respects. Firstly in its composition, it is white ash-white ash-Kiri-white ash-white ash. It is also a little thinner, has more flex, and is not as fast. However, it is still categorized as an offensive blade, so it should be fast enough for most people. Due to its increased dwell, it produces a little more spin than the Acoustic. A great choice for players with spinny serves and loops.

So that wraps up our Nittaku Acoustic review. It may be pricey, but it is one of the top all-wood blades for offensive players.

Only 6 blades rate higher according to players on Revspin, many of which have far fewer reviews, making the Acoustic one of the most universally top-rated blades. I didn’t see any negative reviews during my lengthy research. This definitely surprised me. One reviewer, in particular, even stated, “I do recognize I may sound like an advertisement on the Nittaku home page,” which, while comical, exemplifies just how much players love the Acoustic.

If speed and feeling are what you seek, the Nittaku Acoustic is a superb, reliable choice. And if the price deters you, perhaps see if any players at your local club have any blades from Nittaku’s musical instrument series. They will likely let you have a knock, which will indicate whether it is a good fit for you.