The Best Ping Pong Balls In 2021: Reviews and Buying Guide

You can’t play table tennis without a ping pong ball! Unfortunately not all balls are created equally and in this guide, we’re going to cover all our favorite table tennis balls along with a buying guide to help you choose the right kind. Let’s get started by taking a look at our recommended best ping pong balls to buy in 2020.

What things do you need to look for in the best table tennis ball? Below we’ll cover everything you need to know when looking to buy some new balls.

A Brief History Of The Ping Pong Ball

Table tennis was invented in the late 1800s in Victorian England (read more about the history of table tennis here). The first ping pong balls were made out of rubber and cork but some improvised and even played with golf balls or balls of string.

In 1901, Englishman James Gibb was traveling in the United States and discovered some lightweight celluloid balls that he thought would be perfect for playing ping pong.’ In 1926, the International Table Tennis Federation (ITTF) was formed, and competition table tennis balls were standardized at being 38mm in diameter and made of celluloid.

Over time, advances in rackets made the game faster and faster to play. For the 2000 Olympic games in Sydney, the ITTF increased the size of the ball, from 38mm to 40mm. This was intended to make the ball easier to see for television cameras and slow down gameplay to make the game more entertaining for spectators. Today, table tennis balls that are labeled ’40mm’ are these 40mm, celluloid balls that were implemented at that time.

In 2014, the ITTF changed table tennis ball material from celluloid to a non-flammable plastic. These balls are just slightly larger in diameter than the old celluloid balls which is why you’ll see balls labeled as 40+.

How much do ping pong balls weigh?

The official weight of a ping pong ball should be 2.7 grams. That being said a ball may weigh between 2.67 and 2.77 grams. The ITTF will sample 24 balls and the mean sample must be between 2.69 and 2.76 grams and no more than 1 ball out of 24 sampled may be outside of the acceptable range.

What is the diameter of a ping pong ball?

What are ping pong balls made of?

Today’s ping pong balls are usually made of acrylonitrile butadiene styrene (ABS) to avoid the flammability of celluloid. However, even since 2014 when the new materials were introduced, there have been huge advances in the kinds of plastics and polymers available.

The ITTF current policy is that table tennis balls are standardized for size, weight, bounce, veer, hardness, color, sphericity, thickness, even labeling and packaging, but there are NOT requirements for what the ball be made of. The ITTF has specifically crafted these guidelines to encourage innovation and exploration of new materials.

Where are ping pong balls made?

Almost all table tennis balls are produced in China as well as a few other parts of Asia, but there are smaller companies located around the world producing them too. For a great behind the scenes look at how balls are made, check out this video of the DHS factory in Shanghai:

Ping Pong Ball Star Ratings: What Do They Mean

Table tennis balls are given a number of stars, from 1 to 3. Balls with 3 stars are of the highest quality and are the most durable, while 1 star balls will break or lose their shape quicker. Novelty balls, toy balls, beer pong balls, and table tennis balls intended for children often don’t have any stars at all.

It’s important to know that these star ratings are not official or standardized; each manufacturer assigns their own star ratings, and stars aren’t an independent measure of quality. In fact, some manufacturers give their table tennis balls four or five-star ratings, but they aren’t higher quality than other brand’s three stars.

Balls with three stars are usually better quality though and to be ITTF approved they have to go through rigorous tests and meet official ITTF regulations for tournament play. Two and one star balls are very similar, and should only be purchased in bulk for coaching. Ball without a star rating have no quality assurance, are wildly inconsistent and are much more likely to get damaged.

Here are some of the top brands for table tennis balls, in no particular order:

Based in Japan, Nittaku has been making table tennis equipment since 1920. Their ping pong balls are considered to be some of the best in the world, and they have supplied competition balls for 13 World Championships, 3 Olympic Games, and 7 years of European Championships.

JOOLA is based in Germany and is one of the brands responsible for the first table tennis tables in the early 1950s. In 2018, the company was acquired by American company Sport Squad Inc. Joola table tennis balls draw consistently high praise from experts and amateurs alike.

DHS stands for “Double Happiness Shanghai”, and they are one of the largest manufacturers of table tennis balls in the world. Founded in 1959, the company was the official table tennis ball of the 2008, 2012, and 2014 World Championships.

Double Fish is based in Guangzhou China and has been making sports equipment for more than 60 years. Better known as a supplier of table tennis tables for ITTF international competitions, Double Fish also makes highly rated table tennis balls.

Another Japanese brand that’s found in every line up of top table tennis manufacturers is Butterfly. With two balls in our top eight balls they make quality products loved by players all over the world.

Keeping Your Ping Pong Balls In The Best Condition

To clean a table tennis ball, use a soft cloth or cotton ball dipped in water to lightly buff away any scuff marks, using a gentle circular motion. For stubborn spots, make a paste of baking soda and water, and use that to gently scrub at the ball with the same circular motion. Spots and stains should gently release, and then you can rinse the ball and allow it to dry completely before use.

Whether your table tennis balls are made of ABS or celluloid, they should be stored at moderate temperatures and out of direct sunlight. UV rays will damage and break down both celluloid and ABS composites.

If you want the best high quality ball on the market then you’ll want to get an ITTF approved competition standard ping pong ball. These are going to get a fantastic bounce, be consistent and meet all the official regulations. The downside is they will be a little more expensive than your average ball.

Ping pong balls break quite easily and so if you’re playing regularly you’re going to wear them out. ITTF approved competition standard balls are pretty expensive and so you might want to find something to train with that won’t break the bank. We’ve included some training balls in our list too for that reason. 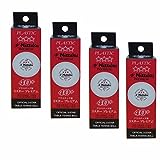 The Nittaku Premium 40+ balls have been a firm favourite of the table tennis community since the introduction of plastic balls in 2014. They’re made in Japan, are ITTF approved, very durable and have a great reputation for their roundness and consistent bounce.

The only downside to them is that they are pretty expensive but if you’re looking for the best ball you can get then most will agree the Nittaku 3 Star Premium balls are the ones you want. 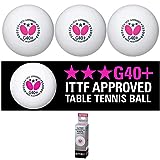 Since the release of Butterfly’s G40+ 3-star balls they’ve been met with significant critical acclaim from amateur and professional players alike. Aiming to replicate the feel of older celluloid balls, Butterfly pride themselves on their consistency, hardness and roundness.

They’re manufactured These balls are made in Germany and are ITTF approved. 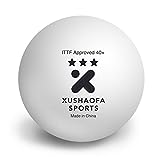 These 40+ Premium Balls from XuShaoFa are seamless balls which means they aren’t two halves glued together like lots of other balls. This makes them more durable and consistent and are a lot less likely to have soft spots where the bounce isn’t as good. As you’d expect there are ITTF approved and are a good option if you’re looking for a premium competition ball.

They’re not quite as expensive as the Nittaku ones so if you’re on a budget but want a high quality ball we’d recommend these highly. You can also buy them in bulk – 144 balls, which makes the price per ball a lot more affordable. 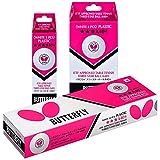 Another great table tennis ball is the Butterfly 3 star A40+ competition balls. Like the others above, they’re approved by the ITTF for competition play giving a great and consistent bounce that is more similar to the old celluloid balls. Definitely worth a try for keen players looking for an upgrade to the standard training balls.

If you’re looking for a low cost ping pong ball for training then we’d recommend the Sanwei 1 star training balls as a good option. Although they’re 1 star balls they’re incredibly good quality and very comparable to some of the other 3 star balls on the market.

If you need a lot of balls for your table tennis club or if you’re training with a robot and need to buy them in bulk without breaking the bank but a reasonable quality then we’d definitely recommend them. You can also buy a pack of 500 balls which are incredibly good value per ball considering their quality.

If you prefer orange balls to white ones then the Nittaku 3-star Nexcel 40+ balls are one of the best we’ve found. They’re very similar to the Nittaku 3 Star Premium balls as they’re also made in Japan have a great consistent bounce plus they’re very durable. They are actually the first ITTF approved orange balls and some players much prefer them over white balls as they’re so much easier to see. 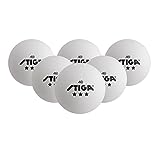 These balls from STIGA are a good option for those looking for a step up from the 1 and 2-star training balls but aren’t willing to pay the higher prices of the competition balls mentioned above. The quality isn’t quite as good as some of the other brands but you’ll get a much better ball than the cheap ones used for training.

If you want to buy ping pong balls in bulk for training or perhaps you want to use them in a robot to practice on your own then these balls from Mapol might be a good option. They’ve not got the quality of a competition standard ball but considering the price, they’re pretty good value. 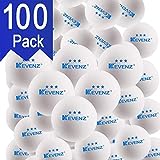 Another option for bulk buying table tennis balls is these ones from Kevenz. You get 144 balls for less than the cost of one pack of the premium competition balls. Pretty good if you ask us!

There are so many different types of ping pong balls to choose from so it really depends on your needs and ability. If you’re playing in tournaments and competitions you’ll want to practice with some of the balls you’ll be using in the actual tournament. That way you’ll get used to the bounce and feel of the ball. But, they are a lot more expensive so you’ll want to find some cheaper ones to use every day for training and casual games.