How to Play Table Tennis with the Perfect Forehand Loop

The forehand loop, also known as the ping pong loop or table tennis loop, is a must-learn shot for anyone serious about table tennis. Offensive playstyles have become increasingly dominant, and the forehand loop is the most versatile stroke in your attacking arsenal.

Before embarking on your quest to learn the perfect forehand loop in table tennis, it is essential you first know how to hit a basic forehand topspin shot: the forehand drive.

What is the Difference Between a Loop and a Drive?

The forehand loop builds upon the fundamentals of the forehand drive, and without it, you won’t get anywhere.

The forehand drive is a more direct topspin stroke. Your bat face is fairly open, making the ball easier to strike and giving you a lot of control. However, there is a hard limit on how fast you can hit the ball due to the topspin limits of the drive.

This is where the table tennis loop comes in.

The loop is a more explosive shot with a much higher spin ceiling. This means if you have good form, you can hit virtually any ball very fast — even if you receive it low over the net. The heavy topspin imparted by the loop drives the ball downward.

A key issue with the loop is its difficulty. You hit the ball with a much more closed bat angle which significantly reduces the margin for error.

Provided you have mastered the drive, let’s learn how to loop and take your table tennis game to the next level. 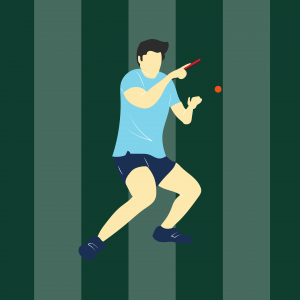 The first stage of executing a table tennis forehand loop is addressing your setup — these are the preparations you make to play an effective forehand loop. As soon as your opponent strikes the ball, you must adapt your setup without hesitation before the ball reaches you, or you’ll fail to play the loop.

Here is a breakdown of the key characteristics (for right-handed players):

Many distinct factors will affect your setup, such as the spin on the ball, which direction you want to play it, and even the speed at which you want to play the loop. However, these fundamental characteristics should apply whatever the scenario.

Note: You need a high-quality rubber to perform a loop. Any old one just won’t cut it. You have tons of choices, though, such as Xiom Vega Pro, Rasanter R47, and Barracuda. To learn more, check out our library of rubber reviews.

The stroke guide for the forehand loop is as follows:

An effective forehand loop is an advanced technique and has a lot of elements that contribute to its success. Failing in just a few of these can destroy your stroke.

At first, this may seem a little daunting. There is a lot of information to take in. But breaking down the stroke into distinct steps makes forehand looping more straightforward.

Transfer of Momentum Through the Body 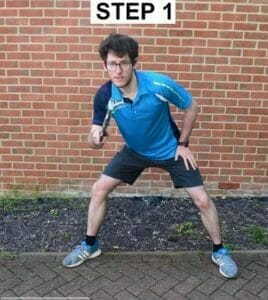 To begin, lower your body and transfer your weight to the back leg – the forehand loop’s foundation. The shoulders lower, and the hips rotate, leaving you facing the same direction as your back foot.

The rapid release of momentum begins in the legs and hips. This is what many people neglect or fail to realize.

By skipping this stage and proceeding straight to arm movement, you lose a considerable deal of energy. This results in a weaker forehand loop.

I cannot stress enough that hip rotation is an essential component of the loop. By neglecting it, you bottleneck what your forehand loop could become.

We now come to the arms, following weight transfer between your legs and hip rotation (as shown by step 1). These are broken down into two parts: the shoulder and the elbow.

You first use your shoulder for a fraction of a second until your bat reaches around your belly button (step 2). This is when the elbow comes into play (step 3).

Step 3: Use Your Elbow

The elbow dominates for the remainder of the stroke until the bat finishes at around eye level.

To help visualize how all of these aspects fit together, I recommend watching the following video. It features slow-motion footage of current world number 3 Ma Long looping on his forehand. His forehand loop technique is as close to perfect as you can get!