Tibhar Evolution is a wildly popular rubber series that is often compared with the Tenergy line produced by Butterfly. They both occupy the same rubber niche, therefore Evolution is largely considered Tibhar’s Tenergy equivalent.

Where Tenergy 05 (TO5) shines in the Tenergy series, Tibhar Evolution MX-P is the standout for Evolution. Its characteristics are similar to T05 in some respects, but not so much in others. Like me, you might consider the high cost of Tenergy a bit of a turn-off. Therefore Evolution MX-P could be just the rubber you need. So without any further ado, let’s dive into this Tibhar rubber review.

✔ Fast, spinny, and super fun to play with

❌ Hard to control and not very durable

At a Glance: What We Like Most About Evolution MX-P

Tibhar Evolution MX-P offers insane levels of both spin and speed, so it is the complete package for highly offensive players. The catapult effect does tail off noticeably with regular use after a few months (depending on usage), yet while it is fairly new, it is one of the most explosive rubbers you can buy. If you are a player who competes in elite competitions, MX-P could give you the competitive edge you need. Smashes are blistering, and once you adjust your stroke for the power loop kick, you will feel almost invincible during topspin rallies.

Marketed as the fastest and most dynamic rubber in the Evolution series upon its release, Tibhar’s MX-P sports a Pro-Tension top sheet for potent spin. Its speed is largely credited to its pimple geometry which allows for a more efficient transfer of energy when striking the ball.

The underlying power sponge is a dazzling red of medium hardness. It is porous and springy.

What Table Tennis Pros Use the Tibhar Evolution MX-P?

Several high-ranking players have selected Tibhar MX-P as their rubber of choice. The current top-rated player is Bernadette Szochs from Romania. Ranked 27th in the world at the time of writing, she uses MX-P on her forehand.

The next highest player is Jorgic Darko of Slovenia. Aged just 23, he uses MX-P on both his forehand and backhand.

Other notable players include Paul Drinkhall, who places 58th in the world, and the legendary Vladimir Samsonov. Vladimir used to use MX-P on both forehand and backhand. More recently, he switched to MX-P50 on his forehand – a newer version adapted to introduce plastic balls. He recently announced his retirement after a long and successful career!

For those seeking an offensive rubber to complement their game, Tibhar Evolution MX-P is a match made in heaven. It generates killer speed without sacrificing spin, which is pivotal for most players.

It only requires a little effort to achieve a catapult effect. And when you start to enter power loop territory, the lethality of your shots is truly a sight to behold. For anyone transitioning from a more muted rubber, it can take a few sessions to adapt your strokes, even if you’re an advanced player.

MX-P uses a lower throw angle than many rubbers. So it’s easy for 3rd and 5th ball attacks to drift just over the table’s edge. Yet once you make this adjustment, you reap the benefits of a charged rubber capable of incredible power.

To no one’s surprise, Tibhar’s MX-P also excels at smashing. I witnessed this first-hand while at university. One of my main training partners switched from Bluefire M3 to MX-P on his forehand. And as a smashing specialist, it served him well. Half of the time, I could barely see his smashes let alone react to them – let’s just say I heavily pinned him on his backhand when we played matches!

Countering is another area the MX-P excels. Punching the ball requires minimal effort. You just need to focus on containing the power to keep the ball on the table. The most difficult area in this respect are loop kills against slow, spinny, openers. It takes some time to get this shot right. However, when you do, it’s crazy quick. Your opponent has next to no hope of making a return.

A surprisingly forgiving attribute of MX-P is its sensitivity. Despite its spinny top sheet, it doesn’t react too harshly to incoming spin, and its pace doesn’t kick in until you put in a bit of effort. This means you do not really suffer in the blocking and pushing department as much as you would expect. So with MX-P, you disproportionally have access to crazy high levels of spin for your own shots relative to the spin you have to counter when making returns.

“One of the best rubber ever made… plays like a boosted T80.” — Killerspint

“An excellent rubber and value. It can be played on either FH or BH.” — ControlledSpin

With ungodly power comes drawbacks in the control department. Tibhar Evolution MX-P is a beast that has to be tamed, and this will only come with practice. It is certainly a rubber tailored for advanced players — you should not use it if you are a beginner, as it will hinder their training. Also, if you do not play a very aggressive style, it would be more fitting to go for a slower rubber. I cannot emphasize enough in this MX-P review that this rubber is for the fastest of the fast. Even if you consider yourself an advanced offensive player, you may well want to go for a rubber that is a tad slower.

Slow, spinny loop openers are one of the tougher shots to perform with Tibhar Evolution MXP. They take a little bit of refining to get right as they are notably harder to execute than for most rubbers. However, once perfected, they work a treat.

The main area Tibhar MX-P suffers is in terms of durability. A lot of MX-P’s pace is due to its factory boost, which begins to fade after around a month or two of use.

Unfortunately, the re-application of boost outside of the factory is heavily insinuated to be illegal under the ITTF rules (despite not being explicitly stated). Therefore, there are no hopes of reviving the rubber to its former glory once it begins to decline. Instead, you should just try to keep it as best protected as possible and clean the rubber sheets regularly.

On the other hand, Evolution does have price in its favor. Priced at $49.95, it is cheaper than the likes of Tenergy 05, which comes in at $79.99. Depending on how fixated you are on your rubbers, most serious players swap to a new set around every 3 to 4 months (if they play regularly). Evolution perhaps comes out on the earlier end of this range. But given its far cheaper price tag and the explosive power it brings, I would say that its durability is not much of an issue. Especially when you compare it with the Tenergy series, its main rival. If you’re set on purchasing Evolution MX-P, I recommend you become familiar with replacing your rubbers. Due to its short lifespan, Tibhar Evolution MX-P will likely need replacing far more often than the rubbers you use for your current setup.

“On close to table loops and power topspin shots balls were flying off the table, unless I close the wrist every time.” — Geomil09

“The only downside with MXP is life. With 15 hours a week training, you might get 2 months out of it.” — Kms86

Tibhar was founded by Tibor Harangozo in 1969, a world-class player and coach of his time. He named the company by taking the first 3 letters of his first and last name. Originally, Tibhar only focused on producing rubbers for the players they sponsored. Shortly thereafter, Tibhar began to cater to all levels of play and soon became a widely recognized brand.

Following Tibor’s death, his partner Erwin Berg assumed the company’s leadership as a former player. Tibhar works closely with coaches and players to facilitate the creation of their products using the latest technology.

MX-S offers a little more spin, while FX-P and EL-P are softer and slower. These could be great options for your backhand.

Alternatively, the newer MX-P50 may look more appealing. It adds a step above in terms of explosiveness, which is hard to imagine!

On the other hand, if you struggle to break free from your Tenergy ties, perhaps try Tenergy 64 or Tenergy 80. Both offer a little more pace than Tenergy 05, which closer aligns with MX-P.

Here are some of our other guides you might find useful. 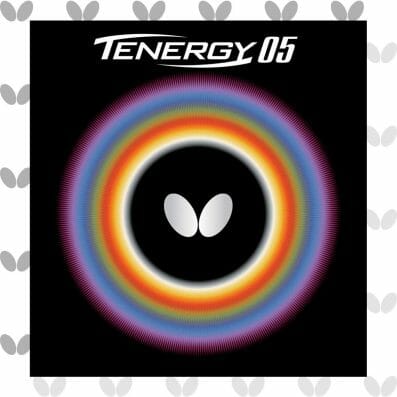 Tenergy 05 is a much older rubber than Evolution MX-P — it was released in 2008 compared to 2019. Despite its age, it has proven very popular at the top level, with many professionals using it. For the most part, Tenergy 05 plays rather similarly to Evolution MX-P. It’s super quick and very spinny, a great choice for offensive players. However, there are a few differences. The first is that Tenergy 05 is softer, making it a more fitting backhand rubber choice than Evolution MX-P for most people.

Tenergy 05 also has a higher throw angle and arc. This makes it a little more versatile than the MX-P rubber. On the flip side, players who instead prefer a more direct stroke may find the rubber by Tibhar more attractive. You should also consider the price difference. Tenergy is over 40% more expensive than Evolution MX-P — that’s quite the price jump!

That concludes our Tibhar MX-P review. It is a killer rubber suited for players sporting aggressive styles of play. Loops and smashes are deadly, but adapting to its sheer pace can take a bit of practice. This is why MX-P should only be used by advanced players who understand how to make the necessary adjustments to their strokes. It is one of the best table tennis rubbers available — but only by those who can effectively wield it.

According to revspin.net, Evolution MX-P places joint top by rubber speed, and sixth in popularity, making it easy to recommend. In my opinion, Tibhar has delivered a superior line to the Tenergy series at a cheaper price tag. Players rejoice!