Best Backhand Rubbers on the Market [2022]

While some players are content using the same rubber for backhand and forehand, others like to experiment – mix and match to find rubbers that suit our unique styles.

After all, we perform strokes on both sides of the paddle but the backhand and forehand are wildly different. For many of us, this stems from the fact we have a favored side. So we give that side more time and love, which causes the other to lag. Consequently, a backhand rubber can be very different from a forehand rubber to fit out particular style of play.

The actual differences between the strokes themselves can be quite significant. Backhands are more contained — you play them in front of the body, mostly with the arm and wrist. The forehand, on the other hand, has much larger strokes and allows for hip rotation.

For these reasons, it makes sense to consider a backhand vs forehand rubber before making a purchase. If you’re wondering which rubber is good on the backhand, keep reading. In this post, we’ll list our top picks for the best backhand rubbers.

What Makes a Good Backhand Rubber in Table Tennis?

Ultimately, personal preference will decide the properties of your choice rubber; but when looking for a good backhand rubber in table tennis, players should follow these general rules.

First, you want a rubber with a good amount of speed. As mentioned earlier, backhand strokes are far more contained than forehand strokes, which means you need a little more help from the rubber in the higher gears for backhand strokes.

Most players also prefer a slightly softer rubber on their backhand side compared to their forehand. The softness allows you to be more versatile and gives you greater dwell time on your shots.

In terms of throw angle, I would say this is one of the more subjective areas. Most of the time players prefer a medium throw angle. Why? Because players want to play more directly with shots, such as with flicks. You don’t necessarily need a heavy arc on your backhand shot – it is rarer to loop from a low position on your backhand compared to your forehand.

Also, Chinese rubbers are great for the forehand, but they aren’t ideal for the backhand. This is because you must generate a lot of power to use them effectively. Most people just won’t be able to use Chinese rubbers to their full effect on the backhand side. 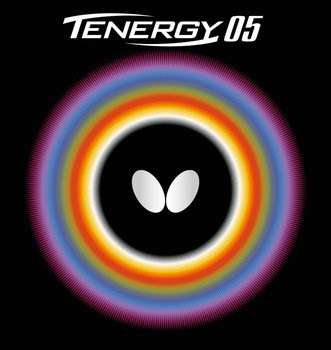 Unsurprisingly, the most popular rubber of all time, Tenergy 05, makes the list as one of the best backhand rubbers on the market in 2022. With explosive power, Tenergy 05 gives you all the speed you need for the more contained backhand strokes.

It is medium-hard and has a high throw angle. Personally, I prefer a lower throw angle but to each their own. Tenergy 05 is versatile and works well on both the backhand and forehand sides. Moreover, it’s been the backhand rubber of choice of many professionals for years and I see this continuing into the future.

The only two caveats to Tenergy 05 are its control and cost. Since it’s so fast and spinny, it’s hard to control. Even offensive players may want something a little more controllable on their backhand. Tenergy 05 is also one of the most expensive rubbers you can buy. It is undoubtedly a good offensive backhand rubber, but if you are on a budget, it may be better to look elsewhere. Many cheaper rubbers do rival Tenergy 05. For a more detailed look at the this rubber, check out our review of Tenergy 05.

Since I’m a huge fan of the Rasanter series, either the R42 or R37 would inevitably make this list. I chose to go with R42 over R37, as the latter is very soft —probably too soft for most players.

Rasanter R42 is an incredibly fast and spinny rubber suited for the offensive modern-day looper. Created as a successor to the Rasant series, it addresses the plastic ball change. This saw the top sheet reduce in thickness, while the sponge thickness increased.

R42 offers sizeable dwell time which makes it a great choice as a backhand rubber. If you are a particularly spinny player, you should have no trouble winning points from backhand loop openers against backspin. Rasanter R42 is one of the spinniest rubbers available and has a medium-high throw angle.

Durability is another area in which R42 shines. It is very long-lasting, which will save you money in the future since you won’t need to replace the sheets as often. Check out our review of Andro Rasanter R42 for more information.

Yasaka Mark V is a staple of table tennis. It’s one of the most popular rubbers of all time and is suitable for all players, no matter their experience.

Sporting a sponge of medium hardness, Yasaka Mark V plays in a very predictable way. The throw angle is medium. It lacks the springy catapult effect of modern rubbers, which makes it easier to control and gives you more confidence in playing your strokes. Mark V is a good forgiving rubber for backhand.

Available in 1mm through to max, you have a great deal of customization at your disposal. Despite the lack of speed even in the higher thicknesses relative to other rubbers, Mark V has still shown its quality on the world stage. It’s helped many players, such as the great Ma Lin, win world titles.

Yasaka Mark V is a great choice for players who don’t want top-notch speed and want their rubber to last. It’s renowned for its durability. It’s also one of the more affordable rubbers. Read our review of the Yasaka Mark V for more insight into it.

Rated and priced very similar to the Yasaka Mark V, it’s a close call between these two rubbers. Sriver has been a long-time favorite and bestseller among Butterfly players. This rubber has helped players score over 20 World and 70 European Titles.

Sriver is available in several different thicknesses, which allows you to cater to your specific style. 1.5mm is a great choice if you lean towards defending, 1.7mm/1.9mm is best for true all-round players, and 2.1mm+ is for all-round players who need an attacking edge.

As far as all-round rubbers go, Sriver is a perfect fit. It may be old, but it doesn’t need the newer technologies developed mostly for the highly offensive style — it’s not that kind of rubber. If you want to block more, I would go for Sriver. If you want a bit more pace, Yasaka Mark V is a slightly better choice.

Xiom Vega Def is a chopping rubber, and one of the hardest rubbers you can buy at 57.5 degrees. Xiom Vega Def is only available in max thickness. This is surprising, since most choppers prefer something a little thinner; but, this rubber provides a different playing experience to what most defenders are familiar with.

Designed in response to the plastic ball change, Vega Def has a very grippy top sheet for generating a heavy backspin. It’s also very fast for a chopping rubber. Players can easily attack to punish poor pushes and loops from their opponents. However, this rubber is a lot slower than the rest of the Xiom range, as it was designed for the defensive game.

The underlying sponge is a deep black, which conveys the threatening potential of this versatile rubber.

TSP Curl P-1R is a great choice if you’re after a long pimple rubber. The Curl line is very popular with table tennis professionals, and outstanding players like Joo Saehyuk and Suh Hyowon use it. Once banned by ITTF regulations, Curl P-1R was re-worked to make it legal once more.

It has the softest and longest pips of the Curl rubber series, which helps it play very deceptively. This will make you an even trickier player to deal with. Curl P-1R can reverse spin very well, turning backspin into topspin and vice-versa.

The TSP Curl P-1R is attractively priced, meaning you can really splurge on your forehand rubber if you want to. I recommend pairing it with an inverted rubber to make your game extra tricky. You can then twiddle your bat between the two to try and force a mistake out of your opponent.

The Best Pickleball Skirts of 2022 

The Best Pickleball Shoes of 2022

The Best Shuffleboard Wax of 2022

The Best Pickleball Balls of 2022

The Best Pickleball Skirts of 2022 

The Best Pickleball Shoes of 2022

The Best Shuffleboard Wax of 2022

The Best Pickleball Balls of 2022

The Best Pickleball Nets of 2022