Rasanter is one of the most popular rubber series that Andro has put out. Its predecessor, Andro Rasant, was similarly very well-received by the table tennis community. However, it was unexpectedly discontinued and replaced by Rasanter – a surprise given its popularity.

Usually, manufacturers will continue to produce popular old lines alongside their new products. Yet with Rasant, they essentially just pulled the plug. I imagine this was to encourage people to make the transition over to Rasanter.

Andro Rasanter R42 ranks as a medium hardness rubber and, in my opinion, is one of the best out there.

The development of Rasanter to better suit plastic balls saw a key change from the Rasant series. After conducting studies regarding the new balls, Andro saw fit to alter the top sheet sponge combination by making the top sheet thinner and the sponge thicker. This allows for an ultramax thickness of 2.3mm!

The sponge is a brilliant green and uses small cells with high rebound potential.

Shockingly, we couldn’t find any table tennis pros who use Rasanter R42, which is a shame. This isn’t due to a lack of the rubber’s ability. It’s more due to the fact that Andro does not have as many sponsorships as other brands.

Sabine Winter plays using Rasanter R47. This is a slightly harder version of R42. She is a German player who ranks 115 in the world. She uses the rubber on both sides.

Unsurprisingly, it is the new energy cell series that is used by one of the top players in the world: Simon Gauzy. As the top seed of France, Gauzy ranks 18 in the world. He has climbed as high as 8 back in March of 2018. He uses Rasanter R53 on his forehand with Rasanter R50 on his backhand. I believe he is also using the Simon Gauzy SL Off as his blade.

There is no doubt in my mind Rasanter is one of the best table tennis rubbers series out there. It plays like a dream, and the Rasanter R42 is simply a new and improved version designed for the plastic ball.

It really does tick all of the boxes as a rubber engineered for performance at the top level.

First, let’s talk looping, as that’s what most of you are curious about. Looping with Rasanter R42 is superb, the throw angle is just a little higher than what Rasant users will be familiar with. 42 refers to the hardness of the sponge so it classifies as medium hardness. This makes it slightly softer than R47 which is the most popular rubber from the Rasanter line-up. With this level of hardness, you can comfortably play both close to, and far away from the table.

Dwell time is excellent, and you can produce spinny loops. Opening from backspin is straightforward and if you are a spinny player it will win you many points outright. Compared to other rubbers, the spin R42 is able to produce is among the best.

According to user reviews on revspin.net, Rasanter’s spin rating clocks in at 9.5. This is joint second with a plethora of other rubbers (9.6 is top). The takeaway here is that R42 is one of the spinniest rubbers on the market.

Yet speed is another area Rasanter R42 excels in, it just places a little less emphasis on speed. It is still a very fast rubber, but it will not quite hit the top speeds of the fastest rubbers you can buy such as Tibhar Evolution MX-P.

To get the most out of R42’s pace you can opt for the ultramax sponge thickness. In the top gears, you can really feel the ball dig through the top sheet into the sponge for an explosive catapult effect. Dwell time is great and you can get super creative with your attack strategy.

What sells this rubber for me is its fantastic durability. I have always found Andro to excel in the durability department and the Rasanter line-up continues this trend. It is no secret that table tennis can quickly become an expensive sport if you allow it to. Of course, the frequency at which you replace your rubbers largely depends on the level you play at, and how often you play.

It seems many people are content swapping out Tenergys every 3 months or so but this quickly adds up. Since beginning my search for a high-performance long-lasting rubber I’ve spent a lot of money, and tried many different rubber series. Until Rasanter, Rasant was always the one that stood above the rest. It played the best and lasted the longest. What more could you ask for?

Now, I’m a picky player when it comes to equipment, and as spin is such a pivotal aspect of my game, when my rubbers begin to decline it’s fairly obvious. And I am forced to replace them. Yet with Rasanter, I have no trouble getting a year out of my rubbers. That’s just incredible when compared with its competitors. For me, Andro Rasanter wins in regards to value for money every time.

To be honest, I’m having a great deal of difficulty coming up with any negatives to discuss. Andro Rasanter R42 is simply an elite table tennis rubber. In my opinion, there is no particular area it is lacking. The only aspect you can make a critique (albeit very picky) is that it isn’t as pacey as the fastest rubbers you can buy.

Yet if you purchase R42 you aren’t after top speed. If you are, a harder rubber makes more sense. The R50 and R53 both offer speeds that rate more or less as high as possible.

Andro was founded in the late 1980s in Dortmund. It is one of the largest brands in Germany and all goods are created within the country. They do, however, have large international influence and have even created a subsidiary in Japan.

Andro supports getting young players into table tennis. Over 25 years ago, they established an Andro Kids Open tournament. It is one of the most reputable tournaments for young players in Europe. Around 1,500 children enter each year. They also have a long-standing table tennis school located in Dusseldorf to develop young players’ skills from an early age.

Rasanter is an excellent series of rubbers that breaks down into two main sub-categories.

The more popular of the two is the R series, which stands for rotation. The original releases were R37, R42, R47, and R50. However, due to its success, Andro released subsequent editions in the R45, R48, and R53. These use new Energy Cell technology.

The second series is the V series. V standing for velocity. Velocity only has two rubbers: V42 and V47.

All of these rubbers are superb. If you are after an alternative to R42, I would ask yourself what hardness best suits your game. If you like to blow people out of the water with killer pace, R53 or R50 may be best. Alternatively, if you want a completely balanced rubber, R45 or R47 should suit you well. 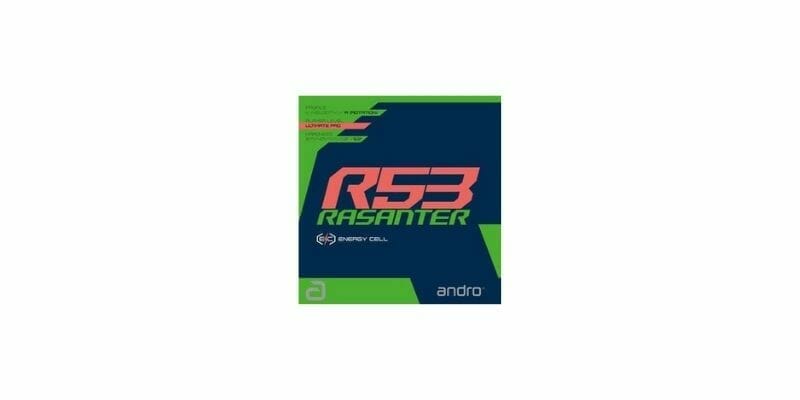 Very spinny: One of the spinniest rubbers you can buy

Price: Excellent value for money when compared with top rubbers

Durability: Lasts far longer than most

Speed: Not as quick as the fastest rubbers, although still very quick

Andro Rasanter R42 is one of the top rubbers available today. If you play a highly offensive game and demand maximum spin, R42 is a rubber you should seriously be considering.

Not only does it have a stellar loop game, but it also lacks any obvious holes in its makeup. It is simply incredible across the board. I am hardly surprised players have been drifting away from Tenergy over the years to Rasant/Rasanter. It plays similarly, is far cheaper, and lasts longer – a true Tenergy killer!

Its affordable price and superior durability are what locks in the seal of approval for me. Not all of us can afford to spend a hundred dollars or so every 3 months. And with Andro Rasanter R42, there really is no need.