Before diving into playing pickleball, you first need to learn how to play the game. While most pickleball rules are fairly straightforward and similar to other racket sports, there are certainly those that are irregular. When combing through the ruleset, quite a few surprised me! So let me help outline all of the pickleball singles rules you need to know. 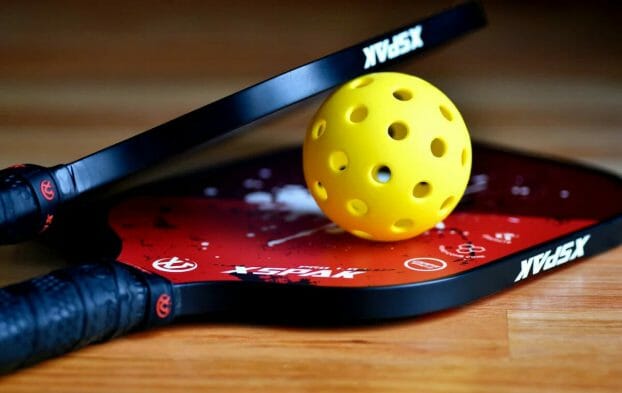 While I often see 5 rules of pickleball being thrown around, I think the pickleball rules for singles fit better under 8 conditions. Here they are!

1. The Ball Must Remain in the Bounds of the Court

As with all racket sports, pickleball features an outlined court. The ball must remain within the bounds of this court. If either player fails to keep the ball in they commit a fault.

2. Serve Underarm Below the Waist

Unlike tennis, where you can send rockets your opponent’s way with overarm serves, pickleball is far more restrained. You have to serve underarm and contact the ball below the waist. This promotes longer rallies.

You also have to serve with at least one foot behind the baseline. Neither of your feet can touch the baseline until you have struck the ball.

3. You Always Serve From the Right When the Score Is Even

It’s easy to tell which side you should be serving from regarding your score. If it’s odd, you serve from the left side of the court, and if it’s even, you serve from the right. This means you switch sides after every successful point on your serve.

Pickleball is commonly compared to a blend of tennis, table tennis, and badminton, so for this rule, it takes inspiration from the latter two sports.

You get just one serve in pickleball. No second chances. And unlike other sports where you replay let points (legal serves that strike the net), you replay them in pickleball. These points instead continue as normal. In 2022 it was proposed to bring the old let rule back, but the request was overturned.

5. You Can Only Win a Point When You Are Serving

The unique spin of pickleball is that you can only gain points when you are serving. This can give the illusion that you are performing worse than you actually are. If you can only win points on your opponent’s serve and consistently fail to secure points on your serve, you will quickly find yourself trailing greatly.

If it wasn’t already clear, the server holds their serve until they lose a point (just like in tennis and badminton).

6. The Ball Cannot Bounce More Than Once on Either Side

Like almost all racket sports that involve bouncing, the ball may only land once on either side of the court. If the receiving player allows it to bounce more than once, they lose the point.

Leading on from this, you should be aware of the “two bounce rule.” This rule stipulates that both the serve and serve receive must bounce before you strike it. As such, you cannot volley back a service return.

7. You Cannot Volley the Ball in the Non-Volley Zone

The non-valley zone is a small area adjacent to the net. Its purpose is to prevent easy smashes. While positioned in the non-volley zone, you cannot volley the ball, you must instead wait for it to bounce before striking it.

You should also know that you cannot strike the ball from outside of the non-volley zone and step into it as part of the same movement. This means jump smashes are out of the window, sorry!

While you can’t smash in the non-volley zone, you can enter it freely at any time.

8. You Win by Reaching 11 Points First With a 2-Point Lead

You play most games first to 11 points and have to get there with a 2-point lead. However, some games are instead first to 15 or 21 (with the same 2-point lead). If you become tied at 11-11, the first player to achieve 2 points of clearance wins the game.

Read Next: How To Play Pickleball – The Ultimate Guide

Now that you know the rules of pickleball, it’s time to talk equipment. You can get started with as much or as little equipment as you really want. As a bare minimum, you’ll need a paddle and some balls. We’ve linked guides for both and recommend that you check them out.

You may also want to consider picking up a pickleball set instead. These can be handy if you have a friend who is also just starting the sport — a two-racket deal will help save you a bit of money. Another product that you might find useful is a pickleball net. If you don’t have any pickleball courts nearby, a portable net allows you to set up a court anywhere.

What Are the New Rules for Pickleball in 2022?

While some 33 pickleball game rule changes were proposed, most didn’t make the cut, and of those that did, there are only 7 you really need to know about.

Can You Drop the Ball to Serve?

You can drop the ball to serve. Formerly a provisional serve, drop serves are now completely legal starting in 2022. Drop serves are great for beginners who cannot consistently serve straight out of their hands.

What Are the 5 Rules of Pickleball?

The 5 basic pickleball rules are as follows:

1. Ball must remain within bounds

2. The ball can only bounce once per side

3. You must serve behind the baseline

4. You must serve so that the ball bounces behind the non-volley zone

The rules of pickleball singles are fairly easy to understand. Just make sure to remember the double bounce rule and the fact that you can only win points on your serve. I feel these are the two main pickleball rules that new players slip up on.

Before you go, I’d also recommend you learn the rules of pickleball for doubles. Playing doubles is extraordinarily common for pickleball, so just knowing the pickleball basics for singles will not suffice. The pickleball rules for doubles build upon the singles ruleset, so there are not that many extra rules to take in.