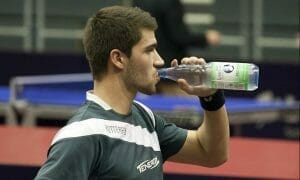 Patrick Franziska is a 29-year-old (2021) table tennis player who plays for the German National team.

Patrick started playing table tennis when he was just 6 years old. But table tennis wasn’t his first sporting love. From 1994-1998, Patrick enjoyed gymnastics, and from 1997-2004 he regularly played football.

Patrick first discovered table tennis in 1998 at TSV Höchst, a German sports club in Odenwald. It didn’t take long for him to realize that this was his calling. And luck was in his favor. He was introduced to many talented professionals. These included Elisabeth Grujic, the wife of Slobodan Grujic, and Wolfgang Boll, Timo Boll’s father.

Growing up, Patrick’s favorite player was Kalinikos Kreanga. Kreanga sported a wildly offensive style that was inspiring to watch. However, Timo Boll came to be one of his many idols – originally playing for the same club. Franziska would go on to play alongside Timo in the national team and the pair would form a strong bond.

Not long thereafter in 2000, Patrick made the state team. Just two years later, he was invited to the German Table Tennis Federation. Here he got to work with the new coaching staff to further his talents. He was also fortunate enough to have dedicated parents. They drove him to training every day which took 2 hours.

At 13 years of age, from 2005-2007, Patrick competed in the Oberliga. This provided him with a great deal of experience. Then, after switching clubs from SV Mörlenbach to TTC Elz, he played in the Regional League from 2007-2009.

Patrick played at a further 3 clubs before settling on Borussia Düsseldorf. Here, he switched up his training after a series of injuries, ditching his previous weight lifting regimen and opting for more bodyweight exercises. At Düsseldorf, he also found he had more control over how he trains which he enjoys.

He reduced his training volume on the table and instead elected to train smarter. He gets to training sessions 30 minutes early to warm up and stays after everyone has left. Yet when he is on the table he is 100% focused. If he feels his performance tapering off he ends the session. Previously, he would continue training as his form dropped. But this would leave him feeling overly fatigued the following day which hindered training.

Franziska admits that he doubted himself playing as a child and was a sore loser in defeat, often throwing his bat and crying. He also didn’t like to watch his matches, especially those he lost. However, in time, his mental toughness grew, and he saw the value in defeat, taking aspects from his losses to improve. He has had a mental coach for some time now to keep him on track – as is common with many top athletes.

To keep his mindset healthy, Franziska recognizes the importance of taking time away from the table. In his downtime, he spends time doing fun activities with friends and family. Despite his love for the sport, he tries to keep “table tennis talk” to a minimum when he is not playing, equating it to how most people don’t want to talk about work after a long day.

Franziska has had a very successful career thus far, citing a total of 99 different achievements since his career began. Currently ranked 17 in the world, he has been as high as 13, which he achieved back in November of 2018.

In his cadet and junior years, he had a great deal of success in many tournaments — claiming gold in the 2009 Polish Junior Open, the 2009 Tunisian Junior Open, and the 2010 European Youth Championships.

Unfortunately, since reaching the men’s age bracket, he has failed to secure any singles gold medals in major events. However, he has been very successful in the doubles and team events — securing 8 gold medals with the help of world-class players such as Timo Boll, Dimitrij Ovtcharov, and Petrissa Solja.

Despite such prominent success, it wasn’t until July of 2019 that Patrick would overcome a top Chinese player. Such is China’s dominance. They are undoubtedly the strongest table tennis team in the world.

His win came against Fan Zhendong in the World Tour Platinum Australian Open. Fan is one of the greatest table tennis players of all time, so it was quite an upset. Patrick made a stunning comeback after losing the first few games. He was delighted with the win, stating “Finally, my first triumph against a top Chinese player. I’m speechless. I certainly played one of my best matches ever, but the tournament is not over.”

Wise words indeed, as he once again had to fight from behind against Mattias Falck after trailing 3-1. He went on to secure a tight 5 setter but unfortunately was defeated by Xu Xin in the semis. This encounter was an even closer 5 setter, in which Patrick failed to capitalize on a match point.

The hope is that his triumph over Fan will instill him with confidence in future competitions. When Patrick asked his close teammate Timo about how he has been so successful against the Chinese, Timo emphasized that it is important to break the mental barrier by securing your first victory. If this holds true, Patrick’s future is bright.

Patrick Franziska is a Butterfly-sponsored athlete. He uses Tenergy 05 and Dignics 05 with the Franziska Innerforce ZLC Blade.

Originally using the Timo Boll ALC, Patrick got the opportunity to get his own blade created. He voiced his joy at getting his blade released on his Instagram. It has been available for purchase since July 2021, so it is very new!

According to Butterfly, it plays the same as the regular Innerforce ZLC Blade, but the design of this release fits Franziska’s aesthetic.

With fierce contention for international events, Franziska is sometimes sidelined for singles. This is because some competition rules are restrictive. The Olympics for instance has a limit of two players per country for singles. With Germany having such strong frontrunners in Timo Boll and Dimitrij Ovtcharov, Franziska is a little unlucky, to say the least.

However, despite Boll echoing he has no plans to retire in the near future, one has to question how long he can keep going. He is now 40 years of age. Another legend of the sport, Vladimir Samsonov, recently retired at 45. Yet, Samsonov is well-known for his all-around style. using blocks far more than your average top player. This undoubtedly helped prolong his career as far less movement is needed in his game.

Realistically speaking, Boll may not match Samsonov’s 45. However, he will get a few more years out of his career. This means Ovtcharov will likely assume the role of Germany’s number 1 table tennis player, allowing Franziska to push up to number 2. This will enable Franziska to enter more singles events, which will hopefully lead to more medals.