Many beginner and intermediate players dread having to practice table tennis serving, often viewing it as a boring and overly repetitive exercise. I mean, it is only one shot, so it can’t be that important, right?

Well, sorry to disappoint, but it’s very important. Your service remains one of the most important shots in table tennis — a player can never have enough practice in trying to improve their service game. Think about it. The service is the only shot in which you have complete control over the ball, so you had better make sure you seize the opportunity.

Do you want more advanced coaching?

Before learning the different types of serving in ping pong, it’s essential to be familiar with the rules of serving so that you don’t get faulted during a game.

Flat Hand With the Ball in Your Palm

The first step of serving in table tennis is holding the ball in an open flat hand with the ball placed in the palm of your hand. You’re not allowed to grip the ball with your fingers. This prevents players from spinning the ball when they throw it up.

Striking the Ball Behind the End Line of the Table

When serving, you have to throw the ball up behind the white end line of the table, and you must start your throw above the table top. You also have to make contact behind the line — no leaning forward to hit the ball close to the net.

Ensuring the Ball Is Not Hidden

One of the most commonly broken rules in table tennis today is hiding one’s serves. While some people do it purposely, most do it by accident.

During the 1980s and 1990s, players began to completely block the opponent’s view of the ball when serving. This meant that the opponent could not see the ball being struck, making it very difficult for the receiver to judge the ball’s type and amount of spin. And accordingly, play a good return.

As a result, the ITTF changed the serving rules so that the ball must remain visible throughout the entire serving sequence. Thereby making it much fairer on serving receivers, and increasing the average duration of rallies.

During a ping pong serve, you can hit the ball from anywhere on your side of the table to anywhere on the opposing side of the table. It’s only during a game of doubles that you have serving restrictions (right side to right side). The middle white line down the center of the table is an aid to help you determine the legality of serves in doubles.

The video below shows some examples of illegal serving in ping pong.

There are many different services in table tennis and it can be difficult to know which one to pick up. Personally, we recommend learning the pendulum and chop serve at a minimum, but do try out the other serves on this list to see which ones you like.

One of the first serves you should learn is the chop serve. It’s loaded with backspin and fairly easy to keep short which makes it harder for your opponent to attack.

While the chop serve is predominantly a forehand serve in table tennis, you can also perform it on the backhand side. To execute, strike underneath the ball from backward to forward to impart backspin. A faint contact helps keep the ball short.

The pendulum is fairly similar to the forehand chop service in table tennis as the setup is the same, and the striking motion is fairly similar. Rather than hitting directly underneath the ball just for backspin, you instead strike more of the side of the ball to impart sidespin.

You should contact the ball on the left-hand side (for righties) and introduce an upwards angle or downward angle if you want topspin or backspin as well as sidespin.

The reverse pendulum is the exact opposite of the pendulum. The setup is identical but you strike the ball in the opposite way to produce the opposing type of sidespin. This means your racket should travel from left to right.

The reverse pendulum serve is one of the more difficult ones to perform effectively, so keep that in mind.

This makes the shovel far easier to perform and much simpler to mix up your spin.

The ghost serve is a popular option among beginners. It’s a variant of the chop serve where the ball bounces on your opponent’s side, and the heavy backspin draws it back to the net.

While this serve looks great in isolation, it’s often a poor match choice. This is because ghost serves usually bounce high, making it easier for them not to drift off the table’s end. However, we all know that high balls are ripe for smashing!

The corkscrew serve is a backhand serve that produces left-to-right sidespin like the reverse pendulum and shovel serve. While facing the table or slightly to the left, and your racket arm across your body, cut across the ball from left to right.

Dimitrij Ovtcharov used to use this serve religiously, and his version became quite iconic! So if you want to see a professional example of this serve, I recommend checking his out.

The tomahawk is another ping pong serve with left-to-right sidespin. You produce it by motioning your racket forward at the elbow, much like you are throwing a tomahawk.

It’s easy to load up on spin when you get the hang of it. I recommend flicking your wrist on impact for that extra bit of spin.

This is one of the rare serves as it is awkward to perform and doesn’t have the best control.

How to Serve in Table Tennis — Step by Step (Pendulum) 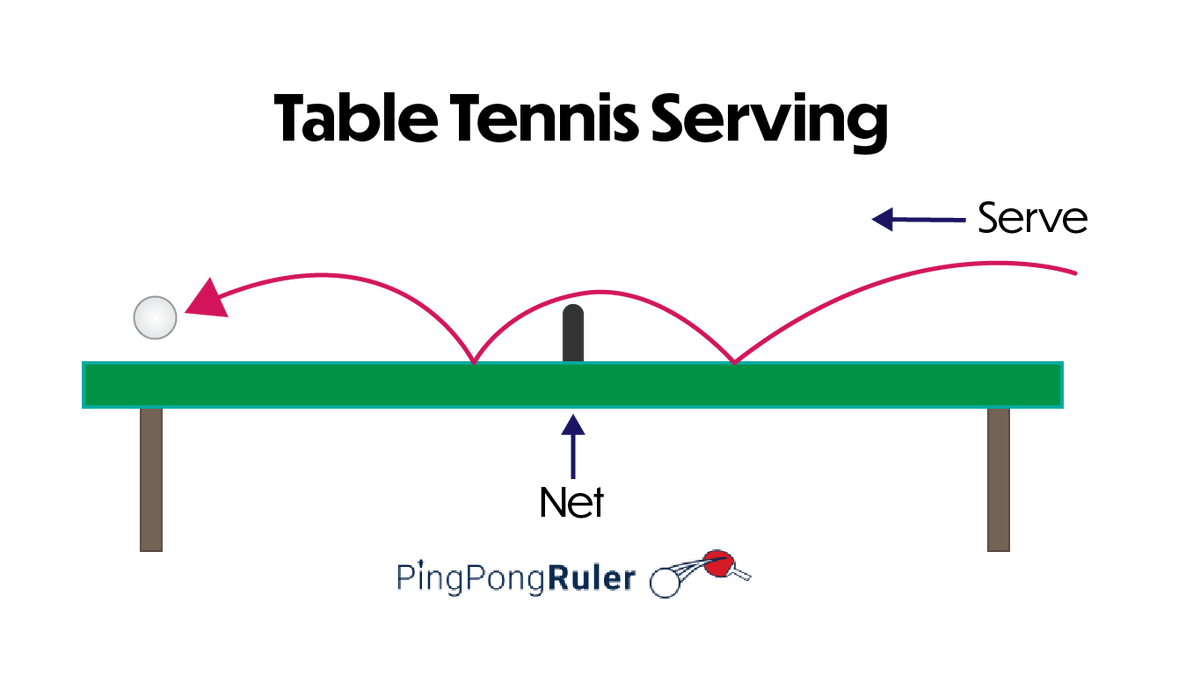 It’s important to know that your serve’s setup depends on the serve you are playing. For example, your position is very different for a tomahawk compared with a pendulum. Given the pendulum is one of the most popular serves today, this is the motion I will explain how to serve in ping pong.

The Benefits of a Great Table Tennis Serve

The serve is the only time in a game of table tennis where you have complete and total control over your shot, at least when it comes to speed, spin, and placement. So you should take complete advantage of it.

Tricky ping pong serves will give your opponent hell, and force a lot of errors. You’ll likely win points outright from failed returns, but you’ll also win points from poor returns, which are there to be punished. Even if you only win one out of every four points as a direct result of your serve, that places you at a major advantage if your opponent isn’t winning any points as a result of their serve.

You should also consider that while you might not win points from your serves in the first few hits, they help you establish the kind of rally in which you are stronger. Say, for example, you’re playing an aggressive looper with a terrible short game, a short chop serve is an excellent option that will shut down their means of attack. This means you can use your stronger short game, and implement the first attack when an opportunity presents itself.

What Makes a Great Serve?

Pretty much all of us have been on the receiving end of great table tennis serves, and it’s no fun at all. But we can take away points from this experience to help us discern what makes a serve great, as they all have similar qualities:

• Deceptive spin: Undoubtedly, the strongest aspect of a quality serve is the spin. It’s usually loaded, and very difficult to read. Getting the ball back on the table is almost a victory in itself, even if it’s high and will likely be put away.
• Varied speed: To upset rhythm, quality servers will alter the pace of their serves to catch you out. This is usually in the form of a few fast serves every game.
• Varied placement: Great servers are masters of placement, and have super control of where the ball lands. If they need to remain safe, they will keep the ball short so that you cannot attack with a loop or drive. However, they will likely also serve long at times, depending on your attacking ability. This helps put you under pressure and forces mistakes.

Knowing When to Change Your Serve

To serve effectively, you should mix up the type of serve you perform and its spin, speed, and placement. This prevents your opponent from becoming comfortable as they never know what kind of serve they will have to receive next.

To make this process easier on yourself, you should have a variety of serves that you can call on as needed. By working through your table tennis serving arsenal, you can figure out what kinds of serves work well and which do not. Of course, you should focus on the serves which give your opponents the most trouble, but don’t overdo it. By performing the same serve over and over again, your opponent becomes familiar with it. Instead, take points here and there, but switch to other serves so that they don’t become too confident.

A good tactic is to save the serve you know your opponent struggles with for points that are crucial. Situations such as when the score is 10-9 or when your opponent has gained a slight lead over you are great examples.

Ultimately, the points you win as a result of your table tennis serving can often be the difference between winning or losing a match. And knowing just how easy it is to win points from these, you really should dedicate a portion of your training time to improving your serves.

Just 10-15 minutes per session will go a long way to improving your service game. It also makes for the perfect training drill when you don’t have a training partner available. So the next time you find yourself stuck on your own, take a box of balls down to the sports center and drill those serves!

Who Serves First in Table Tennis?

Table tennis serving priority is determined by a random event. Calling a coin flip is the most official. However, it is particularly common to hide the ball under the table and guess which hand it is in.

Is There a Second Serve in Table Tennis?

Unlike tennis, there is no second serve in table tennis if you fault on the first. As soon as you throw the ball, it is live, so even if your throw is poor, do your best to make the serve, or you will lose the point.

How Do You Serve in Ping Pong?

To perform a serve in ping pong, you must strike the ball so that it bounces once on your side of the table, and once on your opponent’s side.

You should also try to brush the ball to impart spin — this is what makes serves difficult to return.