A Odd History of Billiards and Pool

Did you know that Shakespeare mentioned billiards in his tragic play, Antony and Cleopatra? That was in 1674. This shows how popular the game was during that period, but billiards was invented hundreds of years earlier, and the history of billiards is weirder than you’d think.

Billiards was invented in the 1340s, according to the earliest records. It started as a lawn game like croquet. Then moved indoors to wooden tables with the green cloth resembling grass. Kings and nobility mainly played it in Europe.

Since the 13th century, the game of pool has evolved and changed a lot. In this post, we’ll give you an overview to understand the diverse history of pool. We’ll be covering interesting facts like:

Stay tuned for more on the origin of billiards and its wide-ranging history.

The History of Billiards – Early Days: 13th to 19th Century 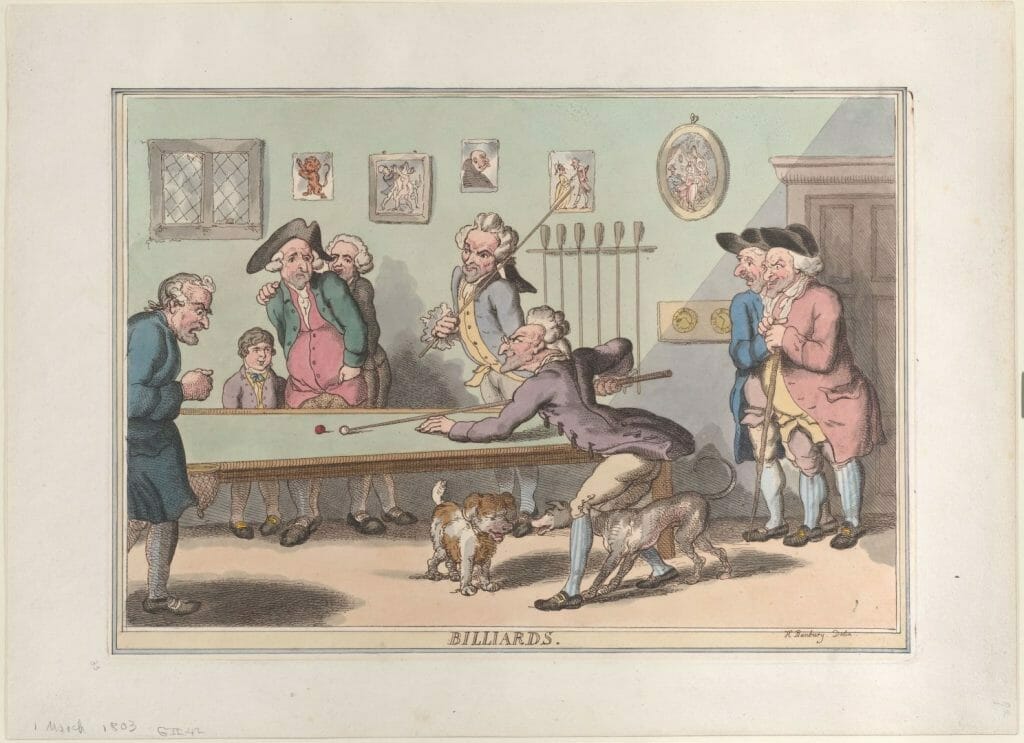 Before we go through the long history of billiards, we’ll first answer, what is billiards? Brittanica states that billiards is any number of games played on a rectangular table with a designated number of small balls and a long stick called a cue.

When Was Billiards Invented?

The earliest record of billiards was in the 1340s in France. But it wasn’t until the 15th century that billiards’ origin became clearer. During this century, wealthy nobles played pool and billiards throughout Northern Europe.

This is why it earned the name the “Nobel Game of Billiards.”

Billiards was probably invented in France since “billiard” seems derived from French. In the initial version of the game, the wooden sticks used for hitting the ball were called “billiart” in French, and the ball itself is “bille“.

Unfortunately, the billiards’ history records don’t name anyone specific as an inventor, so we may never know who invented pool. But other significant people have contributed to the development of the game.

For example, John Wesley Hyatt invented the composite billiard ball. He was the first to come up with plastic in billiard balls when he discovered celluloid in 1869. A $10,000 prize initiated this to substitute ivory in their production. Another major contributor is Captain Mingaud, who invented the modern cue tip and masse shots in the early 1800s when he was in prison.

We should also mention John M.Brunswick, a Swiss immigrant and woodworker in the US. He built a table factory in 1845, which later became the largest billiard company in the world. It was named “Goliath”.

The history of billiards records many changes and developments in the equipment used to play pool and the materials used to make them. Let’s take a look.

King Louis XI of France owned the first pool table in 1470. After the transformation of billiards into an indoor game, there was a suggestion to use a green cloth over the table to imitate grass.

The table’s body was made of wood and covered all the edges to prevent the ball from falling. The edges were called banks. Later, when players hit shots ricocheting off the edge, they called them “bank shots”. Wood was replaced by slate in 1835 due to the latter’s durability. Also, slate doesn’t warp like wood over time.

Concerning the table’s size, until the 18th century, there wasn’t a fixed dimension, but a 2:1 ratio of length to width became the standard later.

To compare with modern tables, check out our review of the best-rated pool tables.

Initially, players shoved the balls instead of striking them. This was done using wooden sticks called maces.

Around the late 1600s, a cue stick was developed to replace maces. Maces were inconvenient when the ball was close to the rail because of their large heads. Players had to turn the mace around and use its handle to strike the ball.

Later on, players used chalk to increase the friction between the ball and the cue stick, improving the performance. Then, by the 18th century, players added a leather piece to the cue tip. This allowed players to apply side-spin, back-spin, and top-spin on the ball.

Until 1829, all the cues were only a single shaft, but later the two-piece cues were invented.

The word cue was derived from the french “queue”, which means a tail, which refers to the handle.

The earliest balls were made of wood as it was inexpensive. However, when Europe started colonizing Africa and Asia, they started using exotic materials from these lands.

Balls started to be made from the ivory in elephant tusks. This was popular among the upper classes of the 17th century since it reflected wealth. Although ivory balls were more beautiful than the ones made of wood, they weren’t durable. Their colors faded and became yellow over time; also, they cracked in humid conditions and broke if they were struck hard.

Enthusiasts needed a solution, and then Hyatt combined camphor, nitrocellulose, and alcohol. This combination of materials was molded under extreme pressure to become a billiard ball. However, it was a poor option and wasn’t durable.

In 1907, Bakelite was invented by Phelan Leo. Bakelite is a plastic-like substance that is strong, durable, easily produced, and safe, and therefore, perfect for making billiard balls. 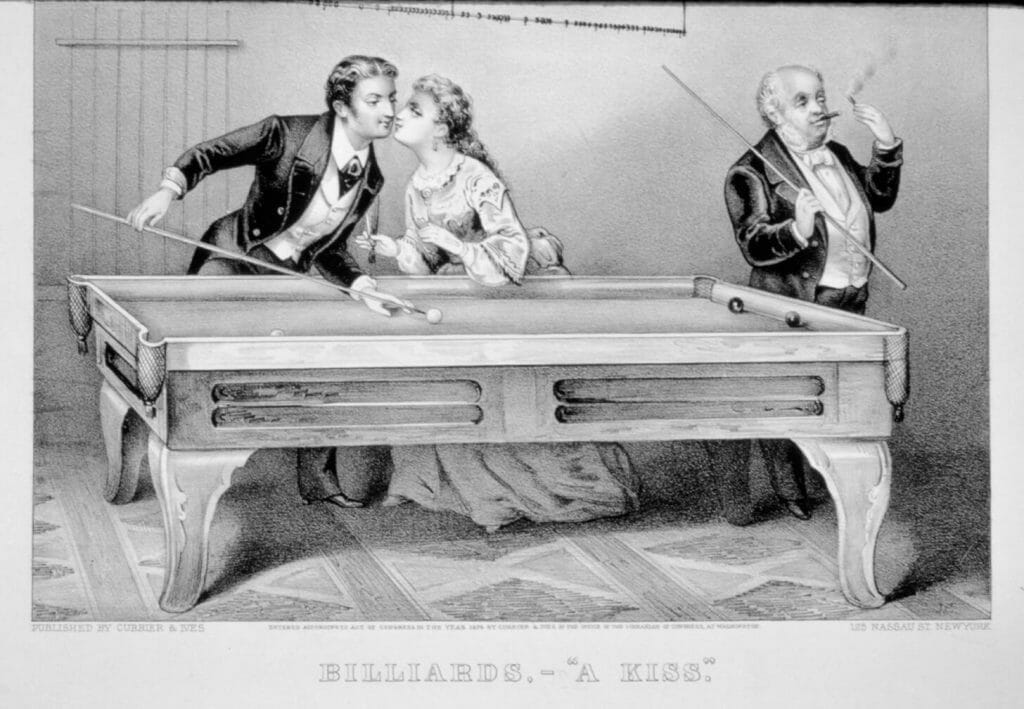 The evolution and rapid development of billiards equipment follow changes like the game itself and the Industrial Revolution.

The said revolution helped standardize the table sizes, which had no fixed ratio before, and the production of balls. Moreover, thanks to discoveries like the vulcanization of rubber, cushions were now more effective.

The emergence of such standards helped players develop and improve their technique, resulting in more masterful and consistent performances.

Why is Billiards Called Pool?

Pool originally implied the act of collective betting, and back in the early 1800s, “Pool rooms” were places people used to bet on horse races.

Following the Industrial Revolution, owners of such rooms installed billiard tables for their clients to pass the time between races. In a bit, the word “pool” became associated with billiards. It was often referred to as a “pool game”. So if you were wondering, why is pool called pool? Now you know.

The popularity of pool rooms also laid the foundations for many modern pool games we know today.

How Have Pool Games Transformed Since Invention?

Now, let’s look at the first pool games and how they evolved.

It’s the first version of what we now know as snooker. Unlike snooker, that’s played with 22 balls, English Billiards was played with three balls and six pockets.

Snooker is now the most popular pool game in England, and there are many tournaments of it every year.

It was played on a four-pocket table with two white and two red balls. The number of points differed depending on whether you scored by pocketing the balls, scratching the cue ball, or making caroms — carom being the mastery of hitting two or three object balls with the cue ball.

Modern carom games were also derived from American Billiards. “Straight rail”, a game played on a pocketless table with three balls, was the forerunner of carom billiards.

Fifteen-Ball Pool was another derivation of the initial Four-Ball game and is the origin of the modern pocket games. The first grand tournament of American Pool was a Fifteen-Ball game held in 1878.

In Fifteen-Ball, the balls were numbered from one to fifteen. Then a player gathered points based on the numbers on the pocketed balls. The aim was to reach 61 points.

However, in 1888, it was decided that hierarchizing the balls didn’t make sense and what counted was the number of balls the player pocketed. Hence, Continuous Pool, in which players would keep points continuously as they racked balls, rose to prominence and quickly became the main championship game.

Following the championship, many forms of pool were derived. Some notable ones include Eight-Ball, Nine-Ball, Straight Pool, and Three-Cushion billiards. If you want to learn more, we wrote an in-depth article about 5 pool games you can try.

The Rise, Decline, and Revival of Pool in the 20th Century

At the beginning of the 20th century, tournaments of cue sports were held annually. Even during and between the two World Wars, it was one of the top entertainment areas for soldiers and veterans.

However, the game declined due to the devastating effects of the Second World War on the entertainment industry. Economies had to be rebuilt, returning soldiers needed to reintegrate with their families and friends and work on their careers, and nobody seemed to have time to spend in pool rooms.

Luckily for the game, though, in 1961, an unlikely savior emerged in the shape of Paul Newman. With the release of The Hustler and its acclaim, in which he starred as a pool hustler, new pool rooms opened in the United States.

Once again, the game quickly became a refuge from the era’s social and political concerns, including the Vietnam War.

Later, in 1986, Newman would revive his role as a pool hustler in The Color of Money (directed by none other than Martin Scorsese), which led to a similar increase in the number of new pool rooms and revitalized interest in the game.

Pool and Billiards in the 21st Century 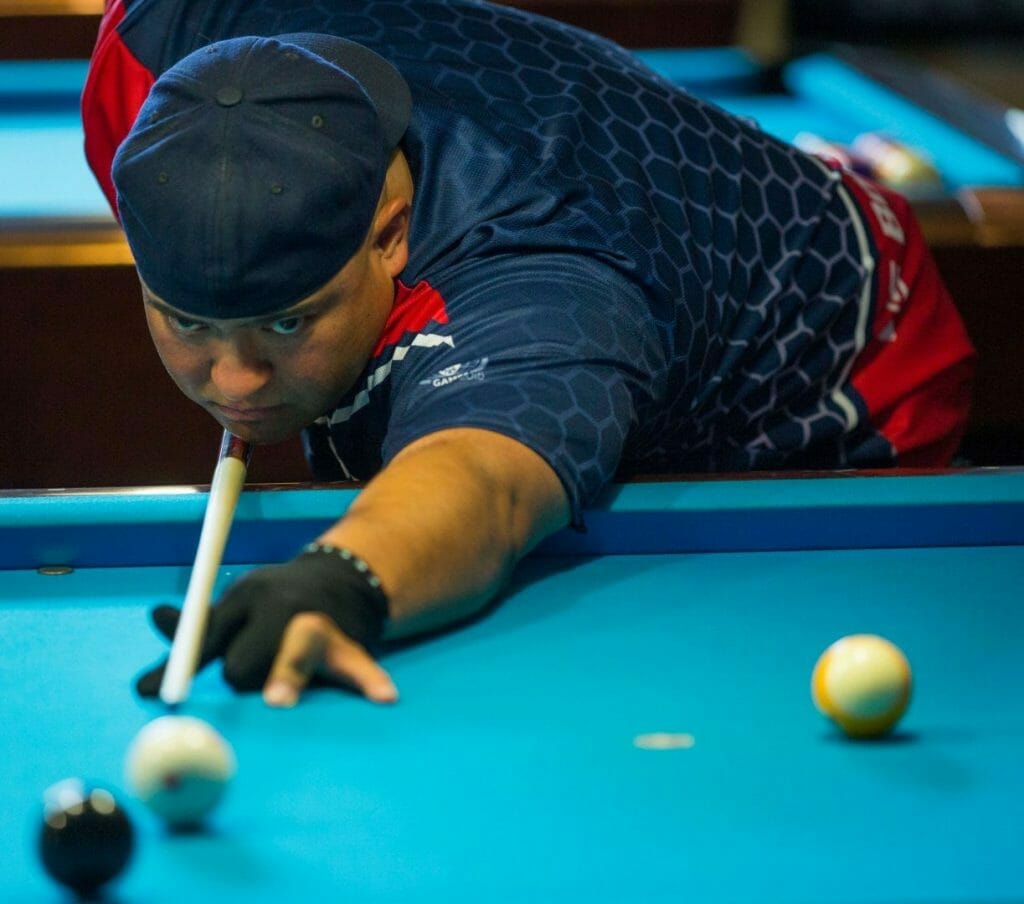 Nowadays, if you turn on your TV and go over several sports channels, it’s pretty likely that you’ll come across a live-action or replay of a pool game.

Many YouTube channels, Twitter accounts, and Facebook groups are dedicated to the game. If you follow them, it’s more than possible that your timeline will be blessed by videos of pool masters exhibiting their jaw-dropping skills.

It might not be a branch of sports as popular as football, soccer, or basketball, but the TV ratings, online figures, and screen presence would be telling that it’s still popular enough.

Moreover, the World Professional Billiards and Snooker Association have been making a case to get snooker included in the Olympic Games. Although their efforts have not yet produced a response from the Olympics Committee, it’s likely to bear fruit in due time.

Billiards has been a part of the World Games since 2001 and was a part of the 2019 African Games schedule. There’s no reason why it shouldn’t be included in the Olympics shortly as well.

Looking over the history of billiards, it might have once been the game of kings, royal families, and nobility, but due to the Industrial Revolution, the game of pool became one of the leading entertainment choices for people from all social classes.

As the revolution provided equipment standards, the nature and rules of the game also developed more consistently. Moreover, many different derivations of the game have found their way into the entertainment sphere.

It also became the first sport to have a world championship in 1873.

After World War II, it might have lost its popularity for quite a while, but Paul Newman quickly revived it thanks to his charisma and charm. Nowadays, it’s debated whether it should become a part of the Olympics or not, and millions of people worldwide enjoy it.

If you want to get started or improve your game, check out best pool cues in our review.