So in this article, we’ll cover some of the more technical International Table Tennis Federation (ITTF) ping pong rules, and hopefully, you’ll learn a thing or two! So without any further ado, let’s discuss ‘what are the rules of ping pong?’

Do you want more advanced coaching?

First things first: the ping pong table. Its upper surface, commonly referred to as the playing surface, should be 8.99 ft (2.74 m) long and 5 ft (1.525 m) wide, and it shouldn’t include the vertical sides of the tabletop.

The playing surface can be made of any material provided that it causes the ball to bounce around 23 cm when dropped from a height of 30 cm.

The playing surface can be any uniform color that is matte and dark, and the end and side of the table must have lines 2cm wide and white.

Our Most Popular Table: 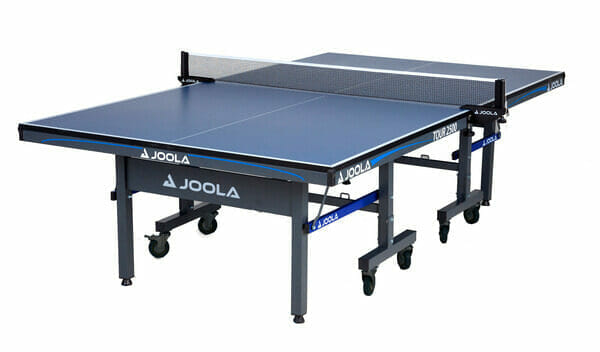 The table tennis ball should be spherical and have a diameter of 1.57 inches (40 mm). It should be made of plastic and weigh 0.09 ounces (2.7 g). Color-wise, the ball must be white or orange and matte.

When it comes to your racket, the table tennis official rules aren’t very strict. Players can use rackets of any size, shape, and weight. However, the racket’s blade must be flat, rigid, and made of at least 85% natural wood (by thickness).

Pimpled rubbers must be no thicker than 2 mm and have pimple density anywhere from 10 per cm² to 30 per cm². Sandwich rubbers, on the other hand, may be up to 4 mm thick, with the top sheet being no more than 2 mm. An easy way to tell if your rubbers are legal is to check on the ITTF website or looks for an ITTF logo on your top sheets.

As of October 1, 2021, The ITTF made an amendment to the rules of ping pong regarding rackets. No longer must one rubber be red and the other rubber be black. Instead, the requirement for one black matter rubber remains, but the other rubber may be any bright color that is easily distinguishable from the black.

Each player must show their racket to their opponent and the umpire before the match begins as well as whenever they replace it with a new one.

Our Most Popular Beginner Paddle: 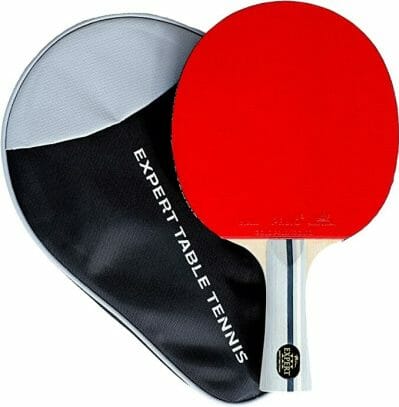 Want to Learn How to Play Ping Pong? Check Out Our Beginner’s Guide

Some of the most important official definitions of table tennis are:

Learning how to serve in ping pong effectively can be difficult to wrap your head around, but the basic ping pong serve rules are simple enough to understand. This is especially true for ping pong rules for singles which allow you to serve anywhere in the opponent’s half of the table.

Ping pong serve rules state that the server must hold the ball in the open palm of their stationary free hand behind the end line. Then, the server must throw the ball upwards; it should rise at least 6.3 inches (16 cm) and fall without touching anything before the server hits it. If the ball touches any items such as clothing the server concedes the point.

The ball has to first bounce on the server’s side of the table and then touch the opponent’s side.

Both the umpire and the assistant umpire can interrupt the match and warn the server if they aren’t certain about the legality of the service the first time it happens. However, all subsequent serves by that player or their doubles partner that don’t comply with the official service rules for ping pong are illegal, and as such, points may be awarded to the opposing team.

To return the ball correctly, the player must hit the ball so that it touches the opponent’s court with or without touching the net assembly. 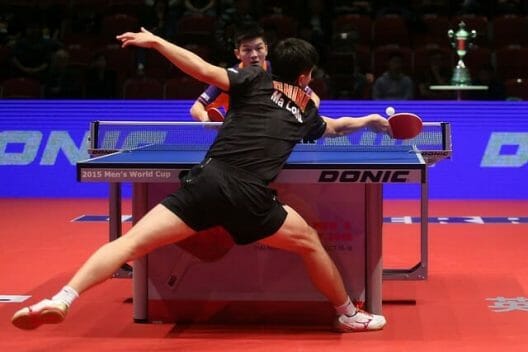 8. The Order of Play

If the match is singles (involves two players), the server should serve correctly, the receiver should make a good return, and then both players should make returns alternately.

A rally is considered to be a let in a number of different situations. For example:

According to the table tennis rules, a player can score a point in the following situations (provided the rally isn’t a let):

The first player or pair who scores 11 points wins the table tennis game. However, if the score is 10:10, a player or pair will have to subsequently gain a two-point lead to win the game.

This wasn’t the case until 2001 when the ITTF introduced the current ping pong official rule. Before that, a game of table tennis was won by the first player or pair who scored 21 points (with a two-point lead).

The International Table Tennis Federation’s official table tennis rules state that a match consists of the best of any odd number of games, which is usually 5 or 7 games.

13. The Order of Serving, Receiving, and Ends

According to the current official rules of table tennis, the winner of a random draw has the right to choose to serve first, receive first, or begin the match at a particular end of the table. The other player or team can instead choose what the opposing team did not. For example, team A won the coin toss and chose to serve, and team B elected to swap ends.

The order of serving and receiving changes after each 2 scored points – the server becomes the receiver and vice versa until the end of the game. This doesn’t apply when both players or teams have scored 10 points and when the expedite system is in operation. In these situations, the order of serving and receiving is the same, but the players serve once at a time (1 point in turn).

14. Out of Order of Serving, Receiving, or Ends

Table tennis rules also specify conditions for when mistakes are made in the sequence of play. The umpire has the right to interrupt the play as soon as they discover that a player serves or receives out of the order established at the start of the match. The play will continue according to the serving and receiving sequence established at the beginning of the game in relation to the reached score. Similarly, the umpire will stop the match if they realize that the players haven’t changed the ends of the table when they should have done so. The play will continue when the players switch their courts.

Fortunately, neither player/team will lose any of the points they scored prior to the discovery of any errors.

In ping pong, the expedite system is introduced when both players or teams request it or when a game lasts for 10 minutes or more. However, if the players or teams have scored 18 points or more in a given game, the system won’t come into operation.

To hasten the game, the expedite rule awards the receiving player or team a point if they return the ball correctly 13 times in a rally.

You should also know that players will serve only once before changing, and the expedite rule stays in effect until the match ends.

That wraps up all the ping pong rules you need to know about. I’m sure at least a few of them surprised you. If they did, perhaps consider sharing with your friends. That way you help them out, and you also help us out too!

As a side note, remember that table tennis rules constantly change as the game evolves — this is a good thing. It just means you must keep a listen out for any major changes you should be aware of. Rest assured, we’ll keep this article updated so feel free to refer back to it as needed.

Can You Hit the Ball Before It Bounces in Ping Pong?

You cannot strike the ball before it bounces in ping pong. Doing so will result in a point given to the opponent.

Currently, the official ping pong rules see sets end at 11. Until 2001, however, ping pong was played until 21. Both require you to win by two points.

What Happens if You Miss a Serve in Ping Pong?

The receiver loses the point. However, a let point may have occurred if the receiver was not ready.

What Is an Illegal Serve in Ping Pong?

Illegal serves may be the result of many actions. If the ball bouncing is incorrect, then the serve is illegal (must bounce once on the server’s and receiver’s sides). In doubles, you must always serve diagonally so that the ball touches both right halves of each end. Failing to do so results in an illegal serve. Lastly, you must keep the ball visible to the opponent and throw it upwards at least 6.3 inches high.

How Often Do You Switch Servers in Ping Pong?

The server change after every 2 serves. But when the players hit deuce, the service switches after every single point.

What Happens if a Player Double Hits the Ball?

What Happens if the Ball Strikes the Side of the Table?

The ball must strike the top edge of the table top, the vertical sides of the table are not part of the playing area, so balls that land here are out.