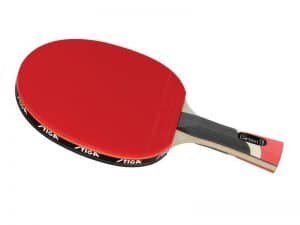 The Best Pool Tables in 2020: A Complete Guide

Donic’s Akkadi Taichi rubber is a unique rubber that blends an extremely tacky, Chinese-style topsheet with a softer, European-style sponge. The Akkadi rubber allows players to have a large amount of variation in their spin and speed, while still maintaining a level of control that other rubbers with equally high spin ratings don’t permit.

On the forehand side, the Akkadi rubber is a viable option for players who like to use lots of spin to disrupt their opponent’s play. Close to the table the rubber is able to produce high amounts of topspin, even from shorter strokes. When looping, a huge amount of topspin is produced, however, it requires a lot of power to get the ball back over the net due to the lower speed rating that the rubber has. In general, power players will find that this rubber slows their game down, even if they are using offensive+ blades.

Playing far from the table with this rubber will see a large amount of spin produced, which makes returning these shots a nightmare, but again, because of the low power of the rubber, some technical adjustments are necessary to generate the force necessary to get the ball back over the net. Players looking for a rubber to play with more power and farther away from the table should consider Stiga’s Calibra Tour S rubber.

For backhands, the Akkadi rubber can serve as a passable option. The low amount of power that the rubber generates means that players have to put a lot of strength into their backhand strokes. There are some benefits for the backhand as a result of the high spin rating; the ball tends to catapult upward with a higher throw angle when it is struck with topspin, making shots go slightly higher over the net. This higher throw angle can result in a higher level of consistency on the backhand side, which is often the weaker side for table tennis players.

When serving, the Akkadi rubber really shines. The high level of spin and control mean that short serves close to the net are simple to produce consistently. Backspin serves will cause errors, even for high-level players, due to the amount of spin produced. Longer serves are more difficult because of the lack of power in the rubber, but because of the amount of spin that can be imparted, errors are still forced, even if long serves do seem a bit slower than with other rubbers. On the third ball, the Akkadi can cause even more problems; because serves are often returned with the same spin direction. Hitting back the return with the same spin often means that the ball is spinning twice as fast as it was before, resulting in more errors from the opponent, even if they know exactly which way the ball is spinning.

Blocking with the Akkadi rubber is where things get dicey. The rubber lacks in power, meaning that a little bit of extra force needs to be imparted onto the ball when blocking. Furthermore, due to the tacky surface, the ball is extremely susceptible to opponents’ spin. Backspin flies straight down off the rubber into the net, topspin shoots straight up way over the table, and sidespin sends the ball to one corner of the room or another. This means that players who plan to block need to be extremely adept at reading spin, however, blocking with the rubber is ill-advised and countering spin shots with either more spin or loops would be the better option with this rubber.

Close to the net, Donic’s Akkadi Taichi rubber is a dream. Pushes have just enough power to get over the net, and enough spin to force the opponent to make errors. In matches when you are using proper pushing technique and applying a lot of backspin, your opponents will be afraid to try and flip or loop against pushes from the Akkadi rubber because of how much spin it produces.

The Akkadi rubber is great for defensive play and chopping. The tacky service means that chops often have hard to predict trajectories and an enormous amount of spin. That being said, the rubber is still susceptible to opponents’ spin, so only advanced choppers should consider this for their arsenal. When considering which side (be it forehand or backhand) to place this rubber on, the user should attach it to whichever side they prefer pushing with, as that is what this rubber is best suited to.

Donic’s Akkadi Taichi rubber has a number of drawbacks. The sticky, tacky rubber requires maintenance between almost every point in matches because of how much dirt and dust stick to it. Furthermore, the tackiness of the rubber wears away faster than most other rubbers on the market. Perhaps the biggest drawback for most players would be the amount of difficulty in producing shots consistently due to the high amount of spin and the low amount of power.

Despite issues with power and durability, the Akkadi Taichi rubber is perfectly suited to more advanced players who play a tricky game with lots of spin and less power. Furthermore, the cost of the rubber is so low that it makes the durability issues less of a problem. At just $30.00, this rubber is one of the best deals on the market. This is the perfect rubber for players who don’t mind replacing rubbers more frequently, and who like to cause their opponents problems with high amounts of spin.